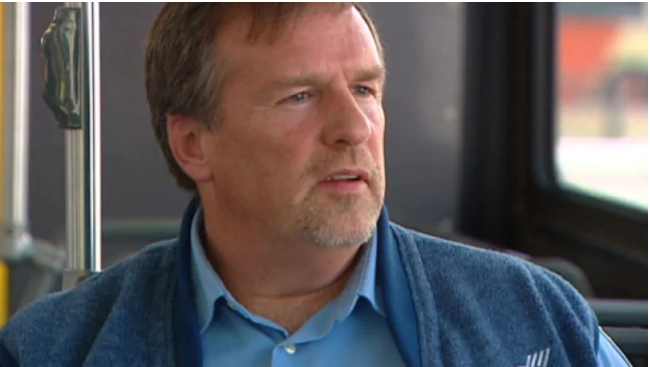 Michael Moore kept the seriousness of his reading problem hidden for years but now the Winnipeg Transit driver is getting national attention for starting a new chapter of his life.

Moore is one of 14 recipients this year of the prestigious Council of the Federation Literacy Award.

The 52-year-old man describes himself as someone who slipped through the cracks of the school system with low marks in English. He scraped by with grades not much more than 50 per cent and never read a book from cover to cover.

He developed day-to-day strategies to cope, often saying, ‘you do it, I’ve forgotten my glasses.’

To become a bus driver at age 25, he orally memorized all 75 rules and regulations. He also kept his shortfall a secret at work by not applying for promotions.

But with children, and faking his way through reading to them, Moore finally decided he needed to get help and get the monkey off his back

“Well this was more a gorilla on my back. It was smothering me,” he said.

At age 46 he decided to sign up with LiteracyWorks, a non-profit literacy organization, but couldn’t make the call — because he couldn’t spell the name to find it in the phone book.

Moore told the telephone operator he was blind and she put him through.

“That was probably the most embarrassing day in my life. And I knew that because I had built up this wall around me and no one was getting in,” he said.

At LiteracyWorks, he was diagnosed with a form of dyslexia that was never caught. He was partnered with a tutor for three years.

With his newfound literacy skills and increased confidence, Moore now serves on the Winnipeg Transit critical crisis team, volunteers with the local suicide prevention hotline, and is about to retire from bus driving to pursue a college diploma and become a counsellor.

He has started attending Red River College, working toward getting his applied counselling certificate. And his goal is to graduate with honours.

“To break through the barrier at that age, after developing techniques to protect himself, was nothing less than remarkable,” he said.